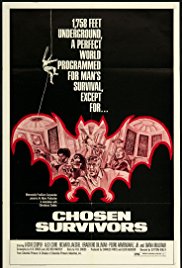 The Bunker Bats are the main antagonists of the 1974 American horror film Chosen Survivors.

A group of refugees hiding from a nuclear apocalypse in a bunker find that they are sharing the shelter with a flock of aggressive vampire bats.

The Bunker Bats possess the following powers and abilities:

The bats are seemingly killed after they are tricked with blood into landing on an electrified mesh. However, many of them survive and they eventually escape into the outside world when the protagonists open an escape hatch.

Add a photo to this gallery
Retrieved from "https://movie-monster.fandom.com/wiki/Bunker_Bats?oldid=2240"
Community content is available under CC-BY-SA unless otherwise noted.