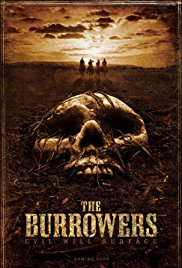 Although once content to subsist entirely on buffalo, the arrival of white settlers and subsequent extinction of nearby buffalo drove these burrowing creature to feed on more humanoid meals.

Burrowers are pale hairless semi-humanoids with hunched backs and hind legs whose knees bend forward like those of a bird. Their heads are human-like, but they have gaping mouths, small eyes and nostrils, and only tiny ear holes in place of external ears.

The film ends with the implication that the Burrowers, although temporarily stopped, will return to attack in the future.

Add a photo to this gallery
Retrieved from "https://movie-monster.fandom.com/wiki/Burrowers?oldid=760"
Community content is available under CC-BY-SA unless otherwise noted.