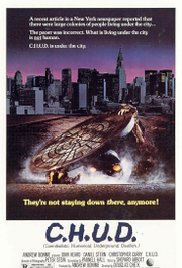 The C.H.U.D.s, also known as Cannibalistic Humanoid Underground Dwellers, are the main antagonists of the 1984 American horror film C.H.U.D..

The C.H.U.D.s are humans that were mutated by radioactive waste dumped in the sewers they called home, turning them into flesh-eating monsters that consume homeless people.

C.H.U.D.s are mutated humans with slimy brown skin and glowing yellow eyes. Their mouths are like those of deep-sea fish and they have pointed ears. They tend to wear tattered clothes.

The few remaining C.H.U.D.s are asphyxiated after the protagonists open a gas main.

Add a photo to this gallery
Retrieved from "https://movie-monster.fandom.com/wiki/C.H.U.D.s?oldid=761"
Community content is available under CC-BY-SA unless otherwise noted.