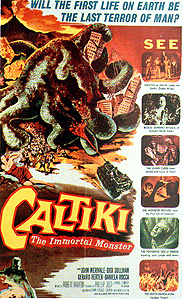 Caltiki is the main antagonist of the 1959 Italian horror film Caltiki – The Immortal Monster.

When a team of archaeologists unearths an ancient Mayan temple, they accidentally awaken Caltiki, a gigantic blob-like monster and the avatar of a vengeful Mayan goddess.

Caltiki is essentially nothing more than a gigantic gelatinous mass of slime.

The Caltiki possesses the following powers and abilities:

Caltiki is defeated after she is set on fire. 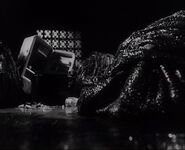 Add a photo to this gallery
Retrieved from "https://movie-monster.fandom.com/wiki/Caltiki?oldid=1087"
Community content is available under CC-BY-SA unless otherwise noted.