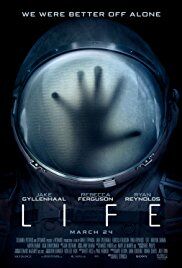 Calvin is the main antagonist of the 2017 American horror film Life.

Six crew members aboard the International Space Station retrieve a capsule containing soil samples from Mars and discovers that it has single-celled organism inside of it. The cell, however, mutates into a multi-cellular organism and escapes into the rest of the ship.

Calvin resembles a white translucent cnidarian of some kind or a multi-headed planarian. Its translucent skin allows its circulatory system to be visible underneath its skin.

Calvin stows away on David's escape pod, making it to Earth. Its ultimate fate is left uncertain.

Add a photo to this gallery
Retrieved from "https://movie-monster.fandom.com/wiki/Calvin?oldid=1424"
Community content is available under CC-BY-SA unless otherwise noted.