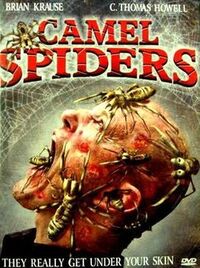 When a squadron of soldiers returns to the United States from the Middle East, they accidentally bring back a number of predatory arachnids that terrorize the Southwestern United States.

The Camel Spiders are abnormally large camel spiders with black highlights on their bodies.

The Camel Spiders possess the following powers and abilities:

The remaining Camel Spiders are killed after the warehouse they are nesting in is blown up.

Add a photo to this gallery
Retrieved from "https://movie-monster.fandom.com/wiki/Camel_Spiders?oldid=1065"
Community content is available under CC-BY-SA unless otherwise noted.