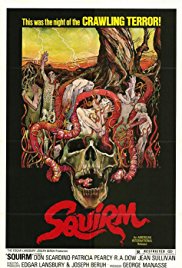 The Carnivorous Earthworms are the main antagonists of the 1976 American horror film Squirm.

A storm causes a Fly Creek, Georgia power line to topple over, electrocuting (and angering) millions of abnormally large earthworms and driving them to the surface.

The Carnivorous Earthworms possess the following powers and abilities:

The power lines are repaired, causing the worms to retreat back into the soil.

Add a photo to this gallery
Retrieved from "https://movie-monster.fandom.com/wiki/Carnivorous_Earthworms?oldid=2210"
Community content is available under CC-BY-SA unless otherwise noted.