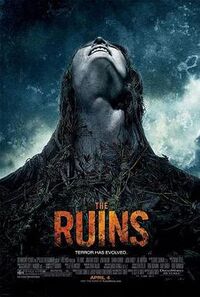 The Carnivorous Vines are the main antagonist of the 2006 American horror film The Ruins.

Unlike all other plants, these vines are cunning, intelligent predators that inhabit an abandoned Mayan temple and kill those who enter, particularly four tourists: Jeff, Eric, Amy, and Stacy.

The Carnivorous Vines possess the following powers and abilities:

The vines succeed in killing all of the film's major characters and continue to reside in the temple.

Add a photo to this gallery
Retrieved from "https://movie-monster.fandom.com/wiki/Carnivorous_Vines?oldid=762"
Community content is available under CC-BY-SA unless otherwise noted.