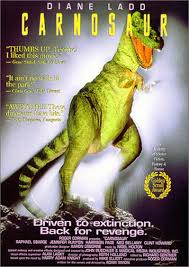 The Carnosaurs are the main antagonists of the 1993 American horror film Carnosaur and its sequels.

Eunice Corporation scientist Dr. Jane Tiptree has engineered a mutant breed of large chickens that spread a mysterious virus to human women, causing the latter to give birth to mutated dinosaurs.

The Carnosaurs are large green theropod dinosaurs with abnormally long and mobile arms.

The Carnosaurs possess the following powers and abilities:

The final surviving Carnosaur is killed after being impaled on a skidsteer. However, the film's ending indicates that the dinosaur birthing plague will continue.

Add a photo to this gallery
Retrieved from "https://movie-monster.fandom.com/wiki/Carnosaurs?oldid=1381"
Community content is available under CC-BY-SA unless otherwise noted.