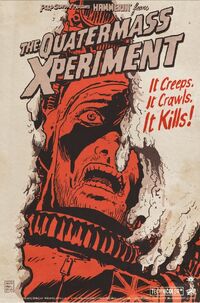 The Carroon Creature, formerly known as Victor Carroon, is the main antagonist of the 1955 British horror film The Quatermass Xperiment.

When the first manned space flight in British history crash-lands back on Earth after a period of lost contact, the only surviving astronaut begins to mutate into a gelatinous creature bent on reproducing.

The Carroon Creature resembles a gigantic mass of tumorous flesh. Sporadically piercing through its surface are numerous body parts (belonging to both Carroon and various zoo animals) and feathery fronds containing large spores.

The Carroon Creature possesses the following powers and abilities:

The Carroon Creature is killed after electricity is re-routed into the metal scaffolding the creature is sitting on, electrocuting it to death and burning it.