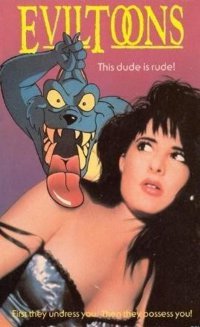 The Cartoon Monster is the main antagonist of the 1992 American comedy-horror film Evil Toons.

A drawing of a cartoon werewolf in a magical book comes to life and begins stalking a group of teenage girls spending the night in a haunted house.

The Cartoon Monster is an animated werewolf-like creature with grayish-blue fur, crazed eyes with yellow sclerae, no irises, and red pupils, and a small black nose. It also has pointed ears, a long snout filled with yellowed teeth, and an enormous red tongue.

The Cartoon Monster possesses the following powers and abilities:

Megan and the book's owner burn the book to ashes, destroying the cartoon creature.

Add a photo to this gallery
Retrieved from "https://movie-monster.fandom.com/wiki/Cartoon_Monster?oldid=2219"
Community content is available under CC-BY-SA unless otherwise noted.