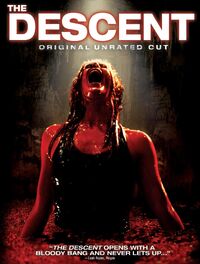 The Cave Crawlers are the main antagonists of the 2005 British horror film The Descent.

A group of friends goes spelunking in the Appalachian Mountains, but they soon find themselves in an unexplored part of the cave system. Not only that, but they are soon pursued by troglodytic creatures.

The Cave Crawlers are naked humanoid creatures with mottled, pale skin, pointed ears, and noses like those of vampire bats. They have small eyes, sharp teeth, and no hair.

The Cave Crawlers possess the following powers and abilities:

Several of the crawlers are killed by Sarah, but most of them survive.

Add a photo to this gallery
Retrieved from "https://movie-monster.fandom.com/wiki/Cave_Crawlers?oldid=1765"
Community content is available under CC-BY-SA unless otherwise noted.