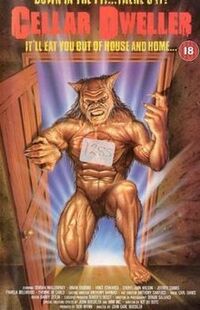 A comic book artist accidentally brings one of his monsters to life. Years later, a student at the art institute the artist's house has become accidentally re-releases the evil creature.

The Cellar Dweller is a tall humanoid beast with yellowish skin, golden eyes with cat-like pupils, and an ape-like face. Its muscular body is covered in sparse patches of dark brown fur, and its ape-like face is counteracted by its wolf-like ears. There is a red pentagram carved into its chest.

The Cellar Dweller possesses the following powers and abilities:

Whitney pours white-out on the drawings of the Cellar Dweller and then burns them.

Add a photo to this gallery
Retrieved from "https://movie-monster.fandom.com/wiki/Cellar_Dweller?oldid=2222"
Community content is available under CC-BY-SA unless otherwise noted.