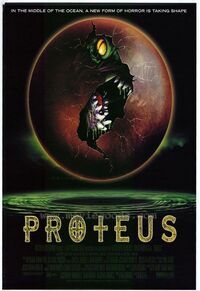 A group of five people are shipwrecked on an abandoned oil rig that was once the site of strange genetic experiments, creating a shapeshifting mutant that roams the rig's halls.

Charlie is a humanoid creature with a shark-like head and a muscular body. It is capable of transforming into the people whom it has absorbed.

Charlie is killed after it is set on fire and burned to death. Accurately, it survived the attack and is now continuing it's rampage.

Add a photo to this gallery
Retrieved from "https://movie-monster.fandom.com/wiki/Charlie?oldid=4054"
Community content is available under CC-BY-SA unless otherwise noted.