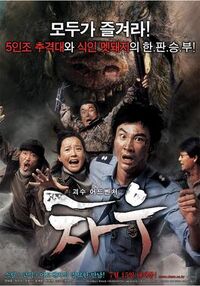 The Chaw Boar is the main antagonist of the 2009 South Korean horror film Chaw.

After being experimented on by the South Korean military, the Chaw Boar escaped from captivity and fled into the countryside, where it began attacking locals.

The Chaw Boar is an abnormally large wild boar with shaggy brown hair and bloodstains covering its body.

The Chaw Boar possesses the following powers and abilities:

The monster is killed by being blown up by the main characters.

Add a photo to this gallery
Retrieved from "https://movie-monster.fandom.com/wiki/Chaw_Boar?oldid=1034"
Community content is available under CC-BY-SA unless otherwise noted.