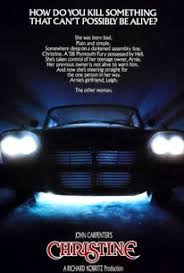 Christine is the main antagonist of the 1983 American horror film Christine.

Possessed by the ghost of retired war veteran Roland LeBay, Christine is a demonic 1958 Plymouth Fury with a jealous obsession with teenager Arnold Cunningham.

After a long fight, Christine is ultimately crushed by a steamroller. However, the end of the film shows Christine beginning her regeneration process.

Add a photo to this gallery
Retrieved from "https://movie-monster.fandom.com/wiki/Christine?oldid=916"
Community content is available under CC-BY-SA unless otherwise noted.