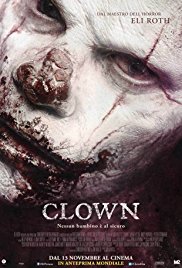 The Cloyne is the main antagonist of the 2014 American horror film Clown.

Once an ancient child-eating creature of European folklore, the since-slain Cloyne has laid dormant for hundreds of years, its spirit possessing a clown costume made from its skin. When Kent McCoy puts on the suit, he finds that it is a bit clingy.

After possessing Kent, the Cloyne resembles him but dressed in an old faded clown suit. His nose is very bloody and damaged and there is a red scar across his left eye. His hair is blue and he wears a frilly collar around his neck.

The Cloyne possesses the following powers and abilities:

The Cloyne is seemingly killed after Kent's wife Meg is forced to decapitate him after she finds him trying to eat their son.

Add a photo to this gallery
Retrieved from "https://movie-monster.fandom.com/wiki/Cloyne?oldid=468"
Community content is available under CC-BY-SA unless otherwise noted.