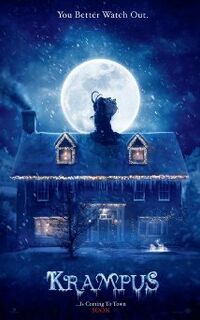 Clumpy, Lumpy, and Dumpy are minor antagonists in the 2015 American comedy-horror film Krampus.

While Der Klown, Perchta, Teddy Klaue, and Tik-Tok are terrorizing Sarah, Tom, and Linda in the attic, these demonic gingerbread men are busy ganging up on Howard downstairs in the kitchen.

Clumpy, Lumpy, and Dumpy are small brown gingerbread men. They have purple gumdrop buttons on their torsos, white frosting trim on their wrists and ankles, green eyes, and pink icing cheeks.

Clumpy, Lumpy, and Dumpy possess the following powers and abilities:

One of the three burns to death after being set on fire, another one is blown apart with a shotgun, and another is eaten by Rosie the dog.