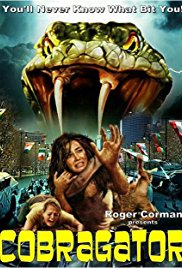 The CobraGator is the main antagonist of the 2015 American horror film CobraGator.

An insane genetic engineer living out in the bayou creates a genetic hybrid between a king cobra and an American alligator, giving rise to a murderous creature.

The CobraGator resembles an enormous snake with an armored body and an alligator-like head. It has large spikes running down its sides and the tip of its tail has several long thin spines.

The CobraGator possesses the following powers and abilities:

The CobraGator is killed after it is blown up. 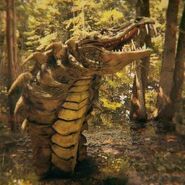 Add a photo to this gallery
Retrieved from "https://movie-monster.fandom.com/wiki/CobraGator?oldid=1005"
Community content is available under CC-BY-SA unless otherwise noted.