Colin the Janitor is a minor antagonist in the 2006 American horror film Silent Hill.

In life, Colin was a pedophilic janitor at Midwich Elementary School who raped young Alessa in the bathroom. In death, he has been cursed to be a nearly-immobile monster for all eternity.

Colin is a tall muscular humanoid with scratched, scarred skin and a black tongue. His only clothing is a pair of brown thigh-length shorts; these are tattered as well. He is blind, his eyes gouged out by the "blindfold" of barbed wire wrapped around his bald head. He appears to have ropes tied around his wrists, and his legs are bent back over his head and tied together at the ankles.

Colin the Janitor possesses the following powers and abilities:

Colin seemingly survives to the end of the film, as Rose flees when she sees him. 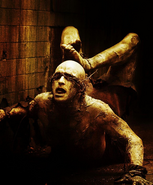 Add a photo to this gallery
Retrieved from "https://movie-monster.fandom.com/wiki/Colin_the_Janitor?oldid=1178"
Community content is available under CC-BY-SA unless otherwise noted.