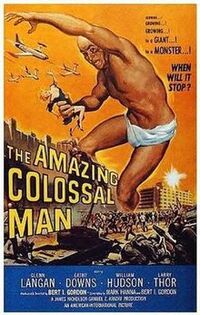 Enormous size
The Colossal Man, real name Glenn Manning, is the main antagonist of the 1957 American science fiction-horror film The Amazing Colossal Man and its sequel.

When Lt. Colonel Glenn Manning is accidentally caught in the blast of a nuclear bomb test, he mutates into a 60-foot giant.

The Colossal Man is a well-built, bald, Caucasian man standing 60 feet in height.

The Colossal Man possesses the following powers and abilities:

The Colossal Man is seemingly killed after he falls off of a dam. However, the sequel showed that he survived. In the sequel, after being brought back to his senses, he commits suicide by electrocuting himself on telephone lines.