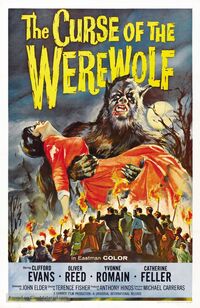 The Corledo Werewolf, formerly known as Leon Corledo, is the main antagonist of the 1961 British horror film The Curse of the Werewolf.

A child born from rape on Christmas Day is cursed to transform into a werewolf and stalk the countryside to the dismay of his adoptive father.

The Corledo Werewolf is a humanoid wolf-like creature with brown fur. It wears blue, red, and white shorts, as well as yellow tennis shoes.

The Corledo Werewolf possesses the following powers and abilities:

A grief-stricken Alfredo kills Leon with a silver bullet.

Add a photo to this gallery
Retrieved from "https://movie-monster.fandom.com/wiki/Corledo_Werewolf?oldid=2352"
Community content is available under CC-BY-SA unless otherwise noted.