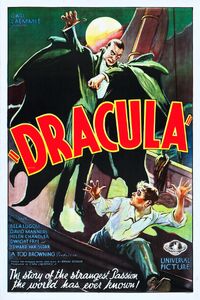 Count Dracula is the main antagonist of the 1931 American horror film Dracula and countless other films.

Feared by the people of a small Transylvanian village, Count Dracula, although he may seem amiable, is actually a bloodthirsty vampire with no qualms about killing and feasting upon whomever he can hypnotize into doing his bidding.

Count Dracula is a gaunt man with pale skin. He has a large forehead and/or a receding hairline, and his hair is smooth, black, and glossy. His eyebrows are large and black. He generally wears a black coat and cape, a white shirt, black pants, and a high collar.

Dracula is killed after he is impaled in the chest with a wooden stake by vampire hunter Van Helsing. 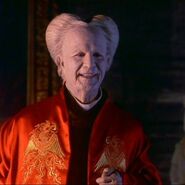 2014
Add a photo to this gallery
Retrieved from "https://movie-monster.fandom.com/wiki/Count_Dracula?oldid=2121"
Community content is available under CC-BY-SA unless otherwise noted.