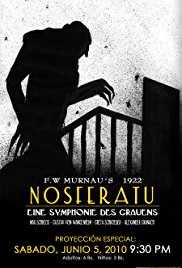 Count Orlok is the main antagonist of the 1922 German horror film Nosferatu.

Feared by the people of a small Transylvanian village, Count Orlok is a vampiric creature lives in a decrepit castle and roams the village at night, sucking the blood of its inhabitants.

Count Orlok is a gaunt man with pale skin. He is bald and has a large forehead, large pointed ears, and large fangs. He wears a black coat with numerous buttons running down its front, and his fingers are long and thin and end in sharp claws.

Orlok becomes so distracted with drinking Ellen's blood that he does not notice the arrival of morning, causing him to be vaporized by sunlight.

Add a photo to this gallery
Retrieved from "https://movie-monster.fandom.com/wiki/Count_Orlok?oldid=2123"
Community content is available under CC-BY-SA unless otherwise noted.