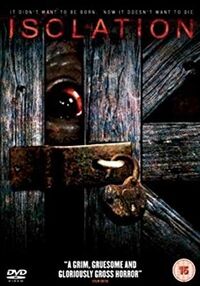 The Cow Spawn are the main antagonists of the 2005 American horror film Isolation.

Genetic experiments on cows in an Irish farm to decrease gestation times result in the birth of a mutant calf that, upon being autopsied, is discovered to already be pregnant with six skeletal creatures, one of which survives and grows to full size.

The Cow Spawn are large multi-limbed creatures resembling centipedes mixed with flexible spinal cords/ribcages. They are covered in red fleshy skin and have numerous spines on their sides.

The Cow Spawn possess the following powers and abilities:

The last living creature is killed after it is caught in and killed by heavy farming equipment.

Adult
Add a photo to this gallery
Retrieved from "https://movie-monster.fandom.com/wiki/Cow_Spawn?oldid=2068"
Community content is available under CC-BY-SA unless otherwise noted.