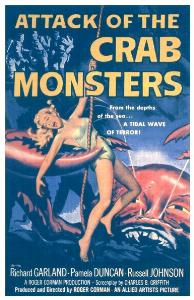 Affected by deadly radiation from the Castle Bravo nuclear tests at Bikini Atoll, these once-normal crabs have mutated into gigantic killers with psychic abilities.

The Crab Monsters possess the following powers and abilities:

The last of the giant crabs are killed when an electrically charged broadcasting tower is knocked into the water, electrocuting them.