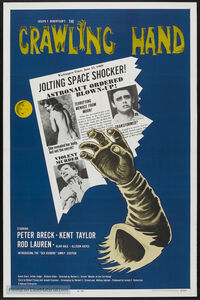 When a spaceship crashes, the exploded astronaut's severed arm takes on a life of its own after being possessed by an alien and begins to strangle the local townspeople.

The Crawling Hand is a severed human arm that has been cut off at the elbow.

The Crawling Hand possesses the following powers and abilities:

The hand is eaten by a cat.

Add a photo to this gallery
Retrieved from "https://movie-monster.fandom.com/wiki/Crawling_Hand?oldid=2354"
Community content is available under CC-BY-SA unless otherwise noted.