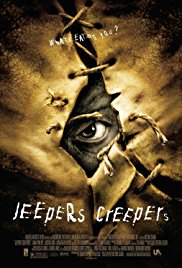 The Creeper is the main antagonist of the 2001 American-German horror film Jeepers Creepers.

The Creeper is an ageless demonic entity that awakens every 23 years to replace his own decaying body parts by consuming the body parts of humans.

The Creeper is a tall humanoid figure with grayish-green skin. He wears a long brown duster coat, a pair of trousers, and a wide-brimmed brown hat. His skin is covered in scales and his face has prominent jowls and sharp teeth. He has a small patch of silvery hair on his head, and the loose skin on his head and face can open up much like a frill-necked lizard's frill.

The Creeper possesses the following powers and abilities:

The Creeper survives to the film's end and successfully steals and absorbs Darry's eyes. 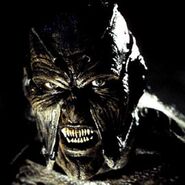 Add a photo to this gallery
Retrieved from "https://movie-monster.fandom.com/wiki/Creeper?oldid=2608"
Community content is available under CC-BY-SA unless otherwise noted.