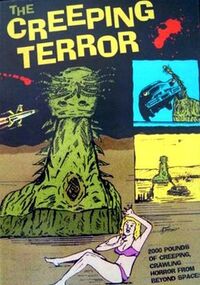 After crash-landing near Angel County, California, these gigantic gastropods leave their ship and begin feeding on the townspeople.

The Creeping Terrors are large slug-like creature covered in dark shaggy hair. Their only real distinguishing features are their large mouths filled with snaggled teeth.

The Creeping Terrors possess the following powers and abilities:

The Creeping Terrors are killed after they are blown up with grenades. However, they were successfully able to send their DNA samples back to their home planet, leaving the possibility of a further invasion.

Add a photo to this gallery
Retrieved from "https://movie-monster.fandom.com/wiki/Creeping_Terrors?oldid=766"
Community content is available under CC-BY-SA unless otherwise noted.