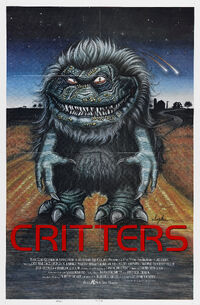 The Crites are the main antagonists of the 1986 American horror film Critters and its sequels.

Said to be the most dangerous of all extraterrestrial species, the Crites were kept in a high-security asteroid prison before they unfortunately escaped and crash-landed on Earth.

The Crites are small furry creatures with vaguely reptilian faces and porcupine-like quills on their backs. Their faces are dominated by their orange eyes and incredibly wide mouths filled with crocodile-like teeth.

When enough Crites are in one place, they can combine their body mass into a gigantic elephant-sized flesh sphere covered entirely in biting mouths, as seen in the second film.

The Crites possesses the following powers and abilities:

The last of the Crites of the first film are killed after Brad throws a Molotov cocktail into their ship.

Add a photo to this gallery
Retrieved from "https://movie-monster.fandom.com/wiki/Crites?oldid=4053"
Community content is available under CC-BY-SA unless otherwise noted.