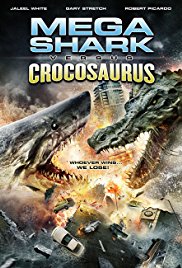 Crocosaurus is the main antagonist of the 2010 American action-horror film Mega Shark Versus Crocosaurus.

Awakened by an illegal diamond mine in the cave it called home, Crocosaurus went on a rampage in an attempt to protect its eggs, eventually leading it into a battle with Mega Shark.

The Crocosaurus is an enormous crocodilian creature with dark muddy brown skin on its back and a light tan underbelly.

The Crocosaurus possesses the following powers and abilities:

Crocosaurus and its offspring are defeated when an underwater volcano sets off a nuclear bomb swallowed by Mega Shark, killing them all.

Add a photo to this gallery
Retrieved from "https://movie-monster.fandom.com/wiki/Crocosaurus?oldid=734"
Community content is available under CC-BY-SA unless otherwise noted.