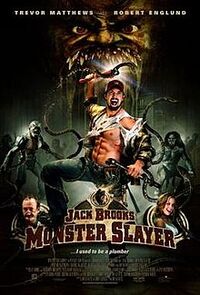 When a school professor named Dr. Gordon Crowley awakens an ancient evil, it possesses his body and transforms it into an enormous slug-like organism.

The Crowley Entity itself is unseen, but when it possesses Dr. Crowley, it transforms his body into an obese, slug-like creature with numerous prehensile tentacles, sparse white hair, beady black eyes, and a wide fish-like mouth.

The Crowley Entity possesses the following powers and abilities:

The entity is killed after its head is blown up.

Add a photo to this gallery
Retrieved from "https://movie-monster.fandom.com/wiki/Crowley_Entity?oldid=1771"
Community content is available under CC-BY-SA unless otherwise noted.