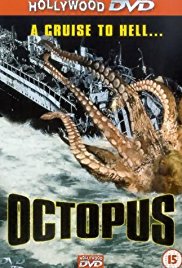 The Cuban Octopus is the main antagonist of the 2000 American horror film Octopus.

A Soviet submarine delivering radioactive materials to Cuba in 1962 is sunken by American submarines, causing its radioactive cargo to sink into the ocean and mutate an octopus into an enormous behemoth.

The Cuban Octopus is a large brown octopus (closely resembling a Pacific giant octopus) measuring between 70 and 80 feet in length.

The Cuban Octopus possesses the following powers and abilities:

The Cuban Octopus is killed after a submersible carrying explosives is driven into its mouth.

Add a photo to this gallery
Retrieved from "https://movie-monster.fandom.com/wiki/Cuban_Octopus?oldid=3009"
Community content is available under CC-BY-SA unless otherwise noted.