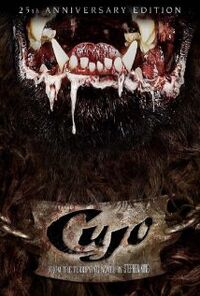 Cujo is the main antagonist of the 1983 American horror film Cujo.

While chasing a wild rabbit through a field near his owners' house, gentle St. Bernard Cujo pokes his head into a small cave where he is bitten by a rabid bat, transforming him into a savage killer.

Cujo is a large St. Bernard dog whose fur has been drenched in blood and dirt, giving him a ragged appearance.

Cujo is killed by Donna, who shoots him to death.

Add a photo to this gallery
Retrieved from "https://movie-monster.fandom.com/wiki/Cujo?oldid=2169"
Community content is available under CC-BY-SA unless otherwise noted.