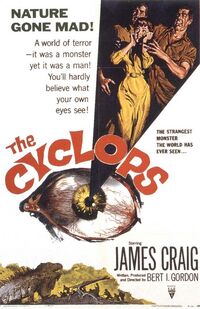 Enormous radium deposits in the jungles of Mexico have caused test pilot Bruce Barton to mutate into a disfigured giant with a hot temper.

Cyclops Barton is a well-built, bald, Caucasian man standing 50 feet in height. The skin and flesh on the right side of his face have melted, leaving him horribly disfigured and with only one functioning eye.

Russ throws a makeshift spear into Barton's eye, blinding him and causing him to presumably bleed to death.

Add a photo to this gallery
Retrieved from "https://movie-monster.fandom.com/wiki/Cyclops_Barton?oldid=2286"
Community content is available under CC-BY-SA unless otherwise noted.