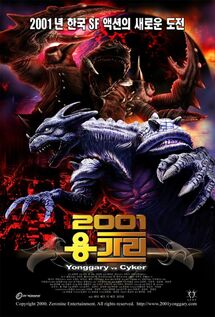 Cyker is the secondary antagonist of the 2001 South Korean-American kaiju film Yonggary or Reptilian (depending on where you live).

After being freed from their control, the aliens sent Cyker to do battle with Yonggary.

Cyker is an enormous crab-like extraterrestrial reptile with a forked tail.

After Cyker's long battle with Yonggary, the former was decapitated by the latter, but the victory was short-lived as Cyker walked towards Yonggary, as if to ensnare it with its tentacles, only to be blown up by its fire breath.

Retrieved from "https://movie-monster.fandom.com/wiki/Cyker?oldid=2673"
Community content is available under CC-BY-SA unless otherwise noted.