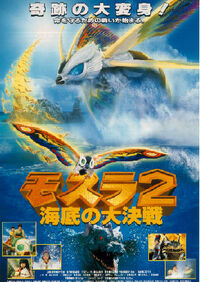 Dagahra is the main antagonist of the 1997 Japanese kaiju film Rebirth of Mothra II.

Thousands of years ago, the ancient Nilai Kanai people created an enormous creature called Dagahra to consume their pollution. However, due to its destructive properties, it was sealed away until the present day, when it awoke and rose again to continue consuming pollution.

Dagahra is a bulky dragon-like reptile with three horns on its head, two holes on its shoulders, and enormous wings. Dagahra's body is mainly dark green in color but with a tannish underbelly. Dagahra has large yellow eyes with slit pupils, as well as fins on its arms and legs and a long tail ending in a fish-like tail fin.

Mothra Leo picks up Dagahra and drops it onto the Nilai Kanai temple, causing both the creature and temple to explode.