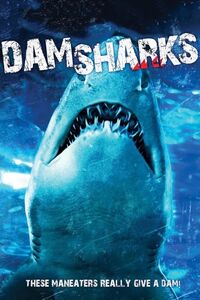 The Dam Sharks are the main antagonists of the 2016 American horror film Dam Sharks.

A group of young corporate executives discovers that a group of bull shark has invaded a freshwater lake and are attempting to build a dam using human body parts.

The Dam Sharks possess the following powers and abilities:

Most of the sharks are killed after the dam they're working on is blown up, but the last one is stabbed in the stomach after it tries to jump over the protagonists' boat.

Add a photo to this gallery
Retrieved from "https://movie-monster.fandom.com/wiki/Dam_Sharks?oldid=768"
Community content is available under CC-BY-SA unless otherwise noted.