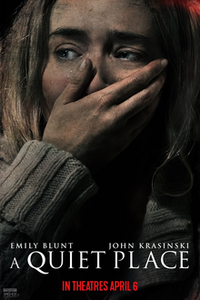 The Dark Angels are the main antagonists of the 2018 American horror film A Quiet Place.

These blind, nocturnal hunters have killed most of the human race after landing on Earth, and they compensate for their lack of other senses with hyper-sensitive hearing that can detect the slightest sound.

The Dark Angels are tall, thin humanoid creatures with pale skin and long limbs. They have no eyes and their ears are covered by large armored flaps concealing deep ear canals.

The Dark Angels possess the following powers and abilities:

The main creature featured in the film is killed after it is shot with a shotgun in its sensitive ear canals.

Add a photo to this gallery
Retrieved from "https://movie-monster.fandom.com/wiki/Dark_Angels?oldid=2602"
Community content is available under CC-BY-SA unless otherwise noted.