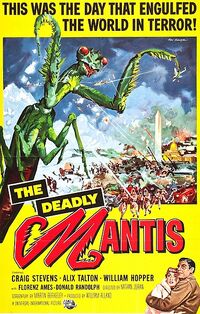 The Deadly Mantis was first discovered after it was released from a several million year-long nap in the North Pole ice by erupting volcanoes.

The Deadly Mantis resembles a giant green praying mantis stretching approximately 200 feet in length. It appears to lack the antennae that real praying mantises have. Based on various advertisements it weighs 4,000 tons.

The Deadly Mantis possesses the following powers and abilities:

The Deadly Mantis is killed at the end of the film by Col. Joe Parkman after Joe throws a chemical bomb in its face.

Add a photo to this gallery
Retrieved from "https://movie-monster.fandom.com/wiki/Deadly_Mantis?oldid=2819"
Community content is available under CC-BY-SA unless otherwise noted.