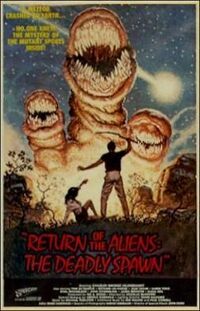 The Deadly Spawn are fast-breeding, toothy organisms that crash-landed on Earth in a meteorite before seeking refuge in the basement of a house.

The Deadly Spawn are large pinkish-orange earthworm/slug-like creatures with multiple rows of sharp teeth. Some of them possess multiple heads, which can bud off into separate creatures.

The Deadly Spawn possess the following powers and abilities:

The "queen" alien is destroyed after it swallows a fake head rigged with explosives. The townspeople then gather together and kill the rest of the offspring.

The ending of the film reveals that a single gigantic alien has survived the events of the film.

Add a photo to this gallery
Retrieved from "https://movie-monster.fandom.com/wiki/Deadly_Spawn?oldid=1448"
Community content is available under CC-BY-SA unless otherwise noted.