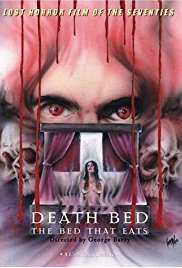 The Death Bed is the main antagonist of the 1977 American surreal horror film Death Bed: The Bed That Eats.

When a demon falls for a human woman and makes love to her on a bed, she is killed and he cries tears of blood onto the bed. Now, once every ten years, the bed becomes possessed by the demon and kills those who lay on top of it.

The Death Bed is a large bed with a thin black frame and base and four large, black, cube-shaped supports/legs. The bed's tall black headboard possesses two white, stained glass "windows", giving it the appearance of having eyes. The bed's bedspread is a desaturated red, and it has red curtains with golden tassels suspended by a black frame.

The Death Bed possesses the following powers and abilities:

The bed's "mother" (the woman who had sex with the demon) is revived and performs a ritual that sets the bed on fire and kills the demon for good.

Add a photo to this gallery
Retrieved from "https://movie-monster.fandom.com/wiki/Death_Bed?oldid=1428"
Community content is available under CC-BY-SA unless otherwise noted.