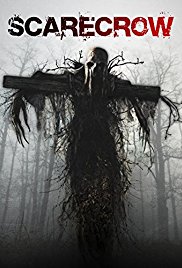 The Demon Scarecrow is the main antagonist of the 2013 American horror film Scarecrow.

The Scarecrow is a conglomerate of spirits from the people who have died in the local cornfield of a small town. A young couple accidentally releases it from the basement where it was kept.

The Demon Scarecrow resembles a large humanoid figure made of black hay and vines. Its face has two empty eye sockets and a large gaping mouth.

The Demon Scarecrow possesses the following powers and abilities:

The Scarecrow is trapped aboard a derelict ship, which then explodes and presumably destroys it.

Add a photo to this gallery
Retrieved from "https://movie-monster.fandom.com/wiki/Demon_Scarecrow?oldid=1127"
Community content is available under CC-BY-SA unless otherwise noted.