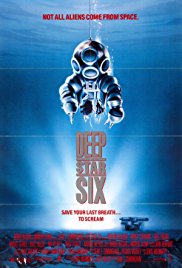 The Depladon, also known as the Eurypterid Monster, is the main antagonist of the 1989 American horror film DeepStar Six.

After using depth charges to open a deep-sea trench for exploration, the crew of a submarine must contend with a deep-sea organism that attacks their vessel.

The Depladon is a large lobster-like creature with a black and orangish exoskeleton. Its mouth is composed of two large mandibles that open like saloon doors to reveal a fleshy maw filled with teeth. Its eyes are large orange spheres that are very close to each other, sitting just above the mouth. The Depladon possesses two powerful forelimbs ending in enormous claws and several smaller limbs.

The Depladon possesses the following powers and abilities:

Add a photo to this gallery
Retrieved from "https://movie-monster.fandom.com/wiki/Depladon?oldid=2294"
Community content is available under CC-BY-SA unless otherwise noted.