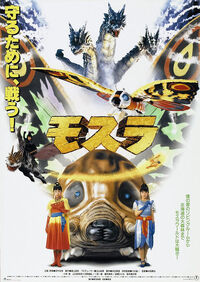 Although defeated millions of years ago by the kaiju Mothra, a member of the ancient Elias people reawakens Desghidorah from its slumber, prompting it to attempt to lay waste to the Earth.

Desghidorah is a bulky quadrupedal dragon with black scales and three heads. Its body is heavily armored, and each head has two large horns. Its wings are bat-like, and the membranes between the wing "fingers" are blood red.

After a long fight, Mothra Leo manages to seal Desghidorah back inside its prison.

Add a photo to this gallery
Retrieved from "https://movie-monster.fandom.com/wiki/Desghidorah?oldid=2076"
Community content is available under CC-BY-SA unless otherwise noted.