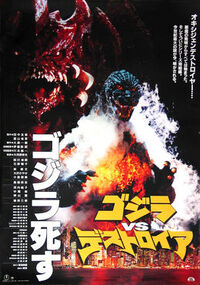 Destoroyah is the main antagonist of the 1995 Japanese kaiju film Godzilla vs. Destoroyah.

When the original Godzilla was killed by the Oxygen Destroyer in 1954, the chemical weapon awakened a prehistoric species of deep-sea crustaceans that ventured onto land and began combining their biomass to form Destoroyah.

Its Juvenile form, composed of millions of small creatures, is larger, walks on several crab-like legs, and is darker in color. Its head has large frills on either side, small yellow eyes, and an extendable jaw inside its mouth. There is a circular orifice on its chest and it has a long tail tipped with a claw.

The Aggregate form is nearly identical to the Juvenile form, but it is much larger. It also has two small crab-like arms and spiked limbs on its shoulders.

The Flying form retains its crustacean-like body, but it has a vertebrate jaw, four large wings, and a horn on its forehead.

As Destoroyah attempts to fly away, the JSDF shoots its wings with a freeze ray, causing it to plummet to the ground and shatter on impact.

Perfect
Add a photo to this gallery
Retrieved from "https://movie-monster.fandom.com/wiki/Destoroyah?oldid=1539"
Community content is available under CC-BY-SA unless otherwise noted.