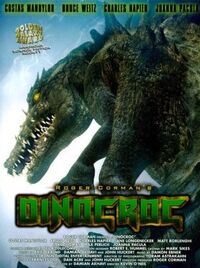 The Dinocroc is the main antagonist of the 2004 American horror film Dinocroc.

A hybrid of Suchomimus and a modern day crocodile, Dinocroc was created by Dr. Campbell at Paula Kennedy's Genetic Research Company.

The Dinocroc resembles a large theropod dinosaur with the head and tail of a crocodile, as well as long powerful arms with clawed hands.

The Dinocroc possesses the following powers and abilities:

The Dinocroc is hit by a train and then stabbed in the eye. However, the last shot of the film shows that it survived.