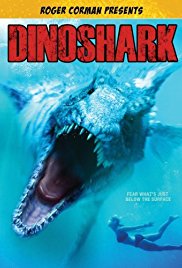 The Dinoshark is the main antagonist of the 2010 American horror film Dinoshark.

Released from an icy glacier that had been preserving the creature for millions of years and had now thawed due to global warming, the Dinoshark went on a killing rampage off the coast of Mexico.

The Dinoshark resembles a prehistoric sea reptile such as an Ichthyosaurus or a Mosasaurus with crocodilian scales and a head similar to that of a Tyrannosaurus rex.

The Dinoshark possesses the following powers and abilities:

The Dinoshark is killed after it is mortally wounded with a grenade and then impaled in the eye socket by a harpoon.

Add a photo to this gallery
Retrieved from "https://movie-monster.fandom.com/wiki/Dinoshark?oldid=330"
Community content is available under CC-BY-SA unless otherwise noted.