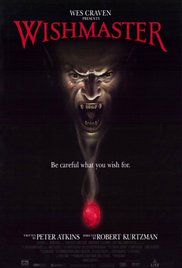 The Djinn is the main antagonist of the 1997 American horror film Wishmaster and its sequels.

An appraiser accidentally discovers a rare fire opal containing an evil djinn that wants to open a portal and allow his fellow djinn to take over the Earth.

The Djinn is a tall humanoid figure with very pale, wrinkled skin. His face is gaunt and thin, and his eyes are a yellowish color. His lips are black and there is a dark gray color to the bags under his eyes. He has two large dark horns that emerge from the top of his head and curve downward before pointing forward on either side of his head. He usually wears a set of reddish armor.

The Djinn possesses the following powers and abilities:

Alexandra uses her final wish to undo the events of the film, causing the Djinn to have never been freed from the opal.