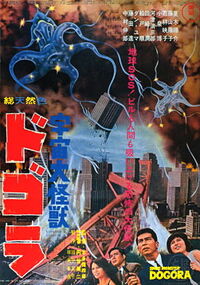 Dogora is the main antagonist of the 1964 Japanese kaiju film Dogora.

A gigantic jellyfish-like alien called Dogora descends from space and begins to suck up all of Tokyo's coal.

Dogora is a blue, translucent jellyfish-like creature with two whip-like tentacles halfway up its body and four more at the bottom of its bell.

Dogora is killed after being injected with a large dose of wasp venom, its only weakness.

Add a photo to this gallery
Retrieved from "https://movie-monster.fandom.com/wiki/Dogora?oldid=2052"
Community content is available under CC-BY-SA unless otherwise noted.